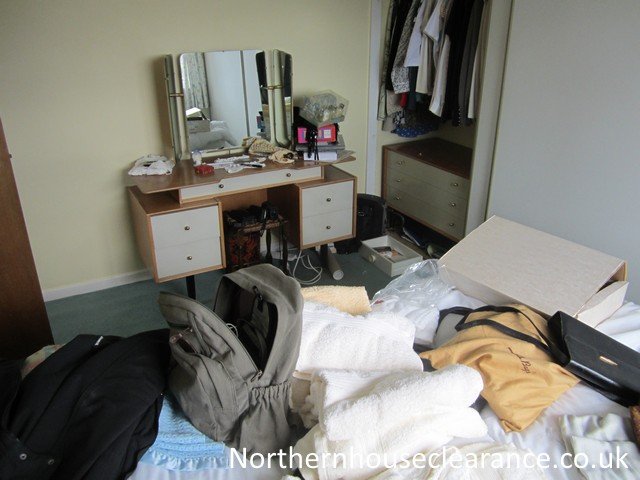 A Full List Of Our Edinburgh House Clearing Services

House Clearance Edinburgh Before & After Photographs

A client contacted House Clearance Edinburgh to ask for our services in clearing out a semi-detached house in a popular residential area of Edinburgh. He was, he informed us, 92 years old, and had decided to go into residential care as he was finding it increasingly hard to get around. However, he was still perfectly lucid and he planned to rent out his house so that he would continue to have an income. He wanted to clear the house to rent it unfurnished, and he also wanted us to tidy up the garden which had become rather overgrown.

The elderly gentleman had lived in the house for 60 years and he had accumulated a large amount of possessions. Some pieces of furniture and his most treasured belongings would go with him to the residential care home. He asked us to go through the rest of the contents, selling what was of value and disposing of the rest.

We started by sorting through the furnishings and found that he had some interesting late Victorian pieces that were well worth putting into auction, which we did on his behalf. The money raised from that went a long way to offsetting our bill. Of the remainder of the furnishings, some were beyond use but some were still serviceable, so we donated the latter to a charity that runs hostels for homeless people in the Edinburgh area. The former went to the local council’s waste facility.

Stuck behind a wardrobe, we found an old portfolio with a series of rather talented watercolours inside. We told the gentleman of our find, and he was overjoyed. It turned out they were by his wife who had died many years previously and he was delighted to have them again as they had a great deal of sentimental value.

Once we’d finished in the house, we cut back shrubs in the garden, removed weeds and mowed the lawn.

The client was very pleased with the service we had provided, and absolutely delighted that we’d uncovered his late wife’s paintings.